At the opening program of the Commonwealth High School (CHS) Crossroads Club on August 2, 2017, Ms. Leticia Leaño, Head of the Values Education Department, shared a perspective about school and teachers—“Home is the first school of students, but the school is their second home. Parents are their first teachers, but teachers are the second parents of students.” CHS, one of the largest public high schools in Quezon City, has been an IGSL Target Area Ministry (TAM) site for one year now.

Addressing the 70 new student club members, Ms. Leaño pointed out CHS as a second home to students to describe the kind of environment the club seeks to provide for them.  The Crossroads Club (or Crossroads Student Caregroup) is a specially designed program that intends to bring transformation in the lives of the students. Students meet for two hours every Wednesday for fellowship and dynamic life lessons in a class setting and then break into small groups on the second hour. 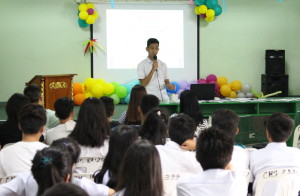 Behind the Crossroads Club is a passionate leader, John-Niel Masong, who is a science and robotics teacher at CHS. Known to the Crossroaders as Kuya Dash (because of the dash in his name), he is not just an adviser to them but a caring second-parent or older brother.

When Dash was in college, he was invited to a student gathering. After attending for two months, he surrendered his life to Jesus at a retreat. Dash’s life has not been the same since. Passionate for the gospel of Jesus Christ, he actively shares Christ to his students, especially through the Crossroads Club. It was also through the club where he met other leaders with whom he could partner to make a difference in young people’s lives.

IGSL and CHS partnership began in August 2016 when a group of IGSL students came alongside Dash in mentoring the Crossroaders. After 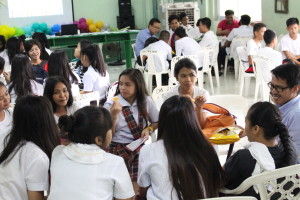 Crossroads sessions, these Ates* and Kuyas** share the gospel to the students and disciple them. As a result, more than 100 students have participated in the youth ministry at a nearby church. Some of them are now regularly attending discipleship groups and serving as volunteers in the church.

Thank God for Dash Masong who is a model of a transformational leader in the education sector. We wish to see more committed leaders like him with whom we can partner or develop through IGSL programs so that they can catalyze transformation in their spheres of influence for today’s and tomorrow’s generation.